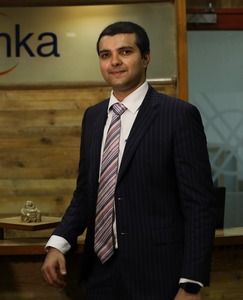 Mr. Ujwal Trivedi interned with MKA & Co in 2008 before embarking on his law degree at University of Warwick. Thereafter, he joined us as an Associate in 2013 with our Commercial Litigation and Arbitration Team and was subsequently promoted to Senior Associate in 2015.

Having an affinity towards the sports industry and wanting to pursue his academic endeavours, he enrolled himself in the Sports MBA Program at Deakin University on account of the “Deakin India Merit Scholarship for academic and sporting excellence” where he was eventually bestowed with the Honour of the “Best Post-Graduate Student (Sport Management) 2017”.

After completion of his academic pursuits, he joined MKA & Co in 2018 gaining exposure in Commercial and Criminal Litigation, Arbitration, White – Collar Crime, Real Estate, Banking & Finance, Intellectual Property, Educational Laws, Matrimonial Disputes (Divorce Matters) and Sports Law. He has appeared before various wings of the Judiciary (Supreme Court, High Court in Mumbai and Allahabad, NCLT Mumbai, SAT etc.) Additionally, he regularly appears and argues matters before the Assistant Directors, Deputy Directors, Joint Directors and Special Director of the Enforcement Directorate. Being instrumental in developing our White-Collar Crime Practice, he was promoted to Partnership in October 2020.

Besides being an active litigator, he has also taken on wider Firm Responsibilities of Recruitment at MKA & Co (amongst others) and introduced measures to hire passionate and enterprising lawyers/litigators of the future. Furthermore, he is also the IC Member of Sexual Harassment Committee at Workplace at MKA & Co.

Mr. Ujwal Trivedi is also an Organizing Committee Member of the Young Leaders Forum of IMC Chamber of Commerce and Industry.

Having experienced poverty at close quarters coupled with his love for animals, he is passionate about addressing animal welfare and economic poverty-related issues. Correspondingly, he is a Trustee of the Troy and Zeus Foundation (an animal, economic and social welfare organization to address issues related to animal welfare and aiding individuals suffering from economic poverty in India). Also, he has been a Fundraiser for Great Cycle Challenge – Australia since 2017, a cause that spreads awareness for children suffering from cancer in Australia.

Over and above the aforesaid, he is a qualified ‘D Licence Coach with the All-India Football Federation’ and was also shortlisted for attending the Asian Football Federations C Licence Program in Canberra, Australia. In his free time, he maintains his own sports blog.